Juneteenth: How (and Why) to Teach Children About the Holiday - African Mommy
Skip to content 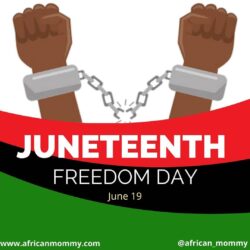 Juneteenth is now officially a Federal Holiday! It’s a good time for parents to teach their child(ren) about the significance of this special holidays. Many schools avoid teaching about Juneteenth because of its connection to slavery in America. But our children deserve to know what really went down. It’s okay if you don’t know the facts correctly; you can always brush up your own awareness to get the facts right or just learn some more while you teach your child. So, back to the basics. What is Juneteenth?

In 1863, during the American Civil War, President Abraham Lincoln issued the Emancipation Proclamation, which declared more than three million slaves living in the Confederate states to be free. Sadly, the Emancipation Proclamation applied only to slaves living under Confederate control and not to slaves in other areas. More than two years would pass, before the news reached every slave living in Texas and on June 19, 1865, they organized the first of what has now become an annual celebration. Juneteenth, (formed from June + nineteenth) is a day to celebrate freedom from slavery with prayer, feasting, songs, and lots of dancing.

In 1979, Texas passed a bill that made it the first state to make Juneteenth an official state holiday. Some other states followed suit over the years; some employers in the states that didn’t, took it upon themselves to make it a holiday for their employees. Finally, in June 2021, Congress passed a resolution establishing Juneteenth as a Federal holiday; President Biden signed it into law on June 17, 2021.

While we rejoice over this new victory, we know that there’s still so much to do. We still have a fight against racism, discrimination, hate crimes, police brutality and a lot more.
According to former US president, Barack Obama, “Juneteenth has never been a celebration of victory or an acceptance of the way things are. It’s a celebration of progress. It’s an affirmation that despite the most painful parts of our history, change is possible—and there is still so much work to do.”

This is exactly why our kids need to learn about the significance of Juneteenth. The fight for freedom is still on. Some things have changed but a lot more need to change. Keep in mind that so many views and options are circulating right now and parents might want to be in charge of the information that goes into their kid’s ears and mind. Talking about the holiday with them also gives you a chance to help them understand whatever prior information they might have received better. Your kids might also have questions about Juneteenth, so this is a great opportunity to let them air their thoughts and ask questions.

Remember, we all have to be a part of the change. So the onus isn’t only on black families but on other races too. Families who aren’t black can seize the opportunity to educate themselves and to also talk to their children about Juneteenth.

How to Talk to Your Child About Juneteenth

If your kids are of school age, you can start the conversation by asking what they already know about the holiday and let them take the lead. If they haven’t heard about Juneteenth, you can learn together. If there are some things you don’t know, you can search for the facts on google together. There’s nothing wrong with letting your kid know you’re still learning too.

Keep in mind that Juneteenth is not the only time you should teach your child about slavery, racism or activism. It’s a continuous process, try to have conversations like this more often because the best way to raise future leaders who will work to make the world a better place is to educate the children now.