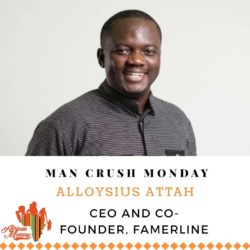 Man Crush Monday: Alloysius Attah is a Ghanaian and the CEO and Co-founder of Farmerline. He went to live with his aunt who was a farmer in the village after his parents divorced. Years later, after making it through college, he became determined to give back to the people who supported him and ease the challenges small-scale farmers go through to produce food and support their families.
In 2013, Alloysius launched Farmerline Ltd in partnership with Emmanuel Owusu Addai.
Alloysius has spoken about his work at the 2013 Social Capital Markets Conference and Mobile World Congress 2014. He is a 2014 Echoing Green Fellow. #Ghanaian