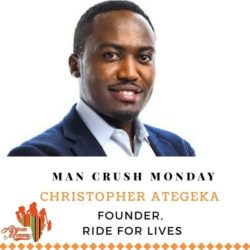 Man Crush Monday: Christopher Ategeka is a Ugandan and the founder of Rides for Lives, a non-profit organization that provides mobile healthcare in rural Uganda.

Chris Ategeka was born in western Uganda where he lived with his siblings and extended family. At a young age, he witnessed both his parents die from HIV/AIDS. He also lost his brother who died on the way to the nearest healthcare facility. All these experiences gave him the passion to save lives.

His organization manufactures and coordinates the distribution of locally made transport vehicles, such as wheelchairs, bicycles and bicycle ambulances to make healthcare and educational facilities accessible to rural Uganda.