Sex Education: Are we teaching the right thing? - African Mommy
Skip to content 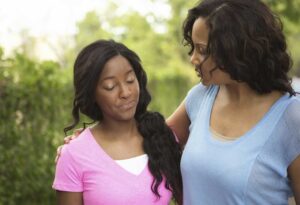 “Don’t have sex until you’re married, or you’ll get pregnant and die.” This is usually what teenagers take away from the “educational sex lessons” they get from their parents. But sex education shouldn’t be just about instilling fear into their young hearts. In fact, “abstinence-only education” isn’t really education. It’s usually more of manipulating your child into obeying by scaring them with rationalizations and half-truths. Parents tend to spend the whole time only talking about the dangers of being sexually active, ignoring the fact that these teenagers will make a choice regardless. What we really need to do as parents is help them make informed choices; they need to be empowered to make decisions. Yes, it’s hard to stay open and honest when having these discussions but it’s really the way to go.

Religion also plays a huge role; Islam, Christianity and some other religious denominations frown upon premarital sex and people are advised to wait till they’re married before engaging in sexual activities. It’s tricky, because whether we like it or not, teenagers will have sex. Some might wait till after marriage, some won’t. And let’s be honest, the latter is more common.

Real sex education is teaching your child all they need to know about their developing bodies, their emotions, sexuality and healthy intimacy. Yes, let them know the emotional and physical consequences that come with being sexually active. Talk about practicing safe sex to avoid unwanted pregnancies or STIs but while you’re at it, don’t be afraid or ashamed to talk about the joys and pleasures too. Let them know how beautiful sex can be, especially in loving, committed relationships.

If your child is feeling pressure from their peers, do your best to assure them that they do not have to become intimate with anyone if they are not ready. Teach them about respect and consent too. Their opinions should be respected while they respect other people’s opinions too.

Seize everyday opportunities to educate them sexually. Teenage romance movies can give opportunities to enlighten your child about sexual intimacy. Growing underarm hairs or other signs of puberty can also be an opportunity to educate your child. They might also come up to you with questions about sex by themselves. Never act shocked, disappointed or dismissive when they do. If you avoid talking about sex with your child, they might turn to an outsider or even their peers or even still, the internet. You’ll agree that none of these options are safe for them to learn about sex.

Now, how do you know that your child has been comprehensively educated sexually?

1. They understand that sex is normal but early sex is risky.

2. They know what to expect with sex and are skilled for communication, refusal and negotiation. Sex should always be consensual.

4. They never feel pressured to have sex. Either by their peers, society or TV.

5. They understand the dangers of having multiple sexual partners.

7. They understand their sexuality or are prepared to deal with being part of sexual minorities.

Talking to your kids about sex and any other topic to your kids from an early age has so many benefits. Apart from empowering them with the knowledge to be able to make good life choices, you will be strengthening your bond with them. It’s a great thing for your kids to always be able to talk to you about anything at all.