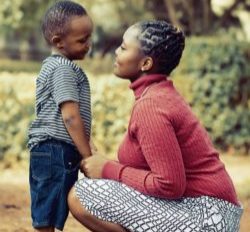 There is a false theory for generations which says when a mom who nurtures a deep emotional bond with her boy, it will prevent him from growing up to be a strong, independent man and turns him into “mama’s boy.”

Mothers determine to a large extent how a son feels about himself and how he relates to other women, especially his wife. Loud and boisterous or meek and mild, a son will view the attributes of his mother, good or bad as the right way a woman should be. This can be used by the mother, either consciously or unconsciously, to manipulate and control her son when he is an adult. Use your power, wisely. A mother’s self-esteem issues should not get in the way of your son and his wife. Understand that your son loves his wife and he loves you too.

Mothers need to understand that making your emotionally immature son your confidant puts a burden on him that is difficult for him to shoulder. When a son sees his mother in pain, he feels like he needs to take matters into his own hands and “fix” the situation. As his mother leans on him emotionally, she is reinforcing his perception of himself as somebody that must be leaned upon in order to have a purpose in life. In his future relationships, this may cause him to build resentment for his wife if she does not display the emotionally deficient and needy qualities of his mother.

Moms who keep their sons close are setting them up for success later in life, both in personal relationships and at work. Because mothers work to teach their sons emotional intelligence and their sons grow up with the communication skills that they need to navigate adulthood.

Exceedingly few women still admire the strong silent type kind on man, let alone a man who expresses his anger by punching a wall. Men who can both listen and articulate their emotions are far more attractive. And of course, sons who grow up respecting and loving their mothers tend to respect and love other women. These same skills will also help them in the workplace. In today’s economy, brute physical strength and a dominating style is no longer a ticket for success. Instead, men need the ability to work in teams and to have the right communication skills and social intelligence that their mothers have been teaching them all along.

Teenage boys who are close to their moms engage in a less risky behaviour. Good parent-teen communication can help lessen the influence of negative peer pressure. But new research shows that it is a boy’s mother who is the most influential when it comes to her son’s decision making about alcohol, drugs and sex. Some researchers speculate that the nature of mother-son communication accounts for the difference: mothers usually don’t have one big “drug talk” or “sex talk” but instead tend to weave the topic into other conversations or family activities.

Lovingly mothering your children involves taking conscious inventory of your personal beliefs and attitudes. A boy’s worldview, in particular, is profoundly shaped by what his mother demonstrates in rearing him day by day and year after year. Your son will learn to love and respect other people, most importantly his wife, by modelling after you.

A close mother-son relationship is good for a boy’s mental health. Studies show that boys who are close to their mothers tend not to buy into hyper-masculine stereotypes. They don’t believe, for instance, that you always have to act tough, do it alone or fight to prove your manhood every time you are challenged. These boys remained more emotionally open. Not only did they have better friendships, but also less anxiety and depression than their more macho peers.

4 thoughts on “REASONS WHY MOTHER-SON RELATIONSHIP IS SO IMPORTANT”